We now have a CompTia A+ certified engineer on staff

Congratulations to Matt on becoming CompTIA A+ certified on Tuesday! 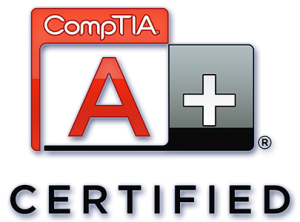 Matt has been building and working on computers since he was a kid.  At eight years old he bought his first computer from a friend, a tape drive PC that played Frogger, with his lawn mowing money (an entrepreneur from the beginning!).  From there, Matt was hooked.  He convinced his parents to buy him a state of the art Commodore 64 in the early ‘80’s.  He read books on how to program it, and even bought a 2400 baud modem so he could visit dial up bulletin boards.  Matt was the first in his middle school to turn in research papers typed on a word processor and printed.  While his teachers complained initially, they eventually realized it was much easier to read than Matt’s terrible handwriting!

In the early 1990’s Matt bought his first Windows computer and quickly began to tear it apart and upgrade its components.  This led to him building his own computers with individual parts bought from computer shows. Matt’s love of computers and technology has only grown from there, and he has always been an early adopter of new technology.

The telecom field is a great fit for Matt, because it combines his love of both technology and working with his hands.  In 2006 Matt joined a Crofton-based telecom and computer company as their telecommunications team leader.  Soon he was asked to take on a larger work load of servicing customer’s computer systems.  During this time, he also obtained his Microsoft Certified Technology Specialist (MCST) certification, leading to even larger roles of configuring Microsoft servers.

When Matt and Meagan started TCC Telecom they knew that continuing education would always be one of their top priorities.  In Spring 2017 Matt went back to school at Carroll Community College to pursue his Network Security Certificate.  It was important to both him and Meagan that he expand his knowledge of networking and to stay ahead of the technology curve.  The first step for him was getting his A+ certification.  He earned an A in both prep classes and passed the A+ test on Tuesday.  Now, Matt’s studies are focused on networking.  Over the summer he received an A in his Networking Essentials class.  In the Fall, he will continue with Networking 1 and 2.

We are excited to be able to offer our customers more services as we continue our education and training.  To learn more about CompTIA and their certifications, click here.  Visit our solutions page to learn more about the services we currently offer.